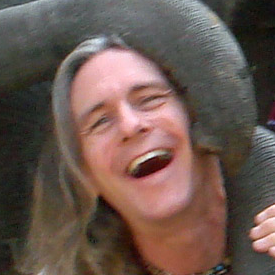 Carter is the director of Astrovisualization at the American Museum of Natural History in New York City, where he directs the award winning space show productions for the Hayden Planetarium that play worldwide. He was part of the millennium rebuilding team of the Hayden, which designed a shift from traditional sky projection to shows based on immersive data visualization of the universe across all scales. As an undergraduate in Geophysics at the University of Colorado, he was an organizer for the Case for Mars series of conferences and part of the original "Mars Underground". In 1996 at NASA Ames, he co-edited and illustrated, "Strategies for Mars: A Guide to Human Exploration", a compendium of review papers addressing the challenges of that goal. Prior to joining the museum, Carter worked at the National Center for Atmospheric Research where he directed visualization efforts for earth system modeling. After joining the museum in 1998, in 2002 he initiated collaboration with Sweden's Linkoping University, School of Media Technologies on methods for using interactive visualization to display the museum's Digital Universe 3D Atlas in planetariums around the world. The collaboration earned him an honorary Ph.D. from Linkoping University in 2006. In 2015, that collaboration led to NASA funding of the open-source, free software called OpenSpace. In 2016, he was awarded the prestigious Technical Innovation Award by the International Planetarium Society. He grew up in a family of artists, attending classes at the Hayden Planetarium from the age of ten. In his global travels he uses his space shows and software to teach about our place in the universe.