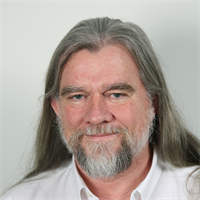 Professor Leonard A Smith received his PhD in Physics at Columbia University. From 1992-2020 he was a Senior Research Fellow (mathematics) at Pembroke College, Oxford (UK), he was Director of the LSE’s Centre for the Analysis of Time Series for the last two decades. In 2020 he joined Virginia Tech as a Professor in SPACE@VT. He is active in the formation, interpretation, evaluation and attempted application of probability forecasts in all areas, with a general interest in improving simulation modelling and scientific support for decision making, with aspirations of relevant uncertainty quantification and the escape from model land. Professor Smith was awarded a Selby Fellowship from the Australian Academy of Sciences, his bestselling book A Very Short Introduction to Chaos is available in over eight languages; he was active in the original experimental design(s) of climateprediction.net. He holds the Royal Meteorological Society’s Fitzroy Prize and is an AGU Charney Lecturer and a Visiting Scientist at the European Centre for Medium-range Weather Forecasts. He tweets as @lynyrdsmyth.